2004 Sayid Jarrah, Jack Shephard, and Shannon Rutherford look over Rousseau's maps and notes, Michael Dawson discusses building a raft and tells Walter Lloyd to help. Charlie Pace looks for Claire's diary, managing to retrieve it from James "Sawyer" Ford. Michael begins construction of the first raft and Shannon again confronts Boone Carlyle about his excursions with John Locke. Walt sneaks to the caves and talks to Locke leading Michael to threaten Locke. Walt disowns his father.
2004 Walt runs away with Vincent. Locke helps Michael find him. Charlie and Kate Austen return Claire Littleton's bags to the caves and Charlie struggles (unsuccessfully) to avoid the temptation to read the diary. Vincent chases something in the woods and Walt follows. Locke and Michael find Walt facing a polar bear in a banyan grove and cooperate to pull him out to safety.

Ben, Annie, The Vaccine, and throw in Adam and Eve

I posted this a long time ago on the ABC boards – and thought I’d post it here to stir up some conversation…..

From Wikipedia:
Johnny Gruelle created the Raggedy Anne and Andy dolls for his daughter, Marcella, who died at age 13 after being vaccinated at school for smallpox without her parents’ consent. Authorities blamed a heart defect, but her parents blamed the vaccination. Gruelle became an opponent of vaccination, and the Raggedy Ann doll was used as a symbol by the anti-vaccination movement.

Ben and Annie Andy and Ann

Maybe Ben and Annie’s relationship never developed beyond a brother/sister like friendship. Maybe Annie died from a vaccine related complication like Marcella. We still don’t know what exactly the island vaccine was for – or if there were multiple kinds of vaccine – and who got how much and when.

Is it too obvious that Ben and Annie were a romantic couple….they got pregnant, Annie died, he spared Rousseau and Alex (and Penny and Charlie) because of it…. and raised Alex to fill the void? I think that’s what probably happened – but it’s fun to think of different options….

Maybe Ben and Annie did have a child, a daughter, who was just fine, until she got the vaccine and died. Maybe Annie was so heartbroken she left the island without Ben who had obligations and couldn’t leave. It would be really interesting if Annie was re-introduced in season 6 as an adult.

SIDENOTE:
I think it’s pretty clear that Juliet, who is blonde and blue-eyed, doesn’t look “just like” Annie, who is brunette and brown eyed, but instead looks like Ben’s mom as illustrated by the painting in Ben and Roger’s house in Dharmaville, which Harper could have seen. However – that makes Ben fondness for Juliet really creepy! 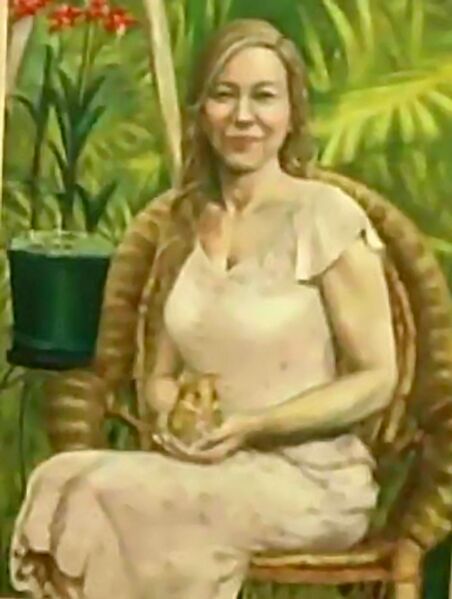 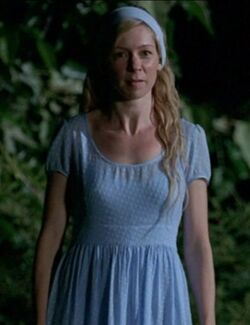 ANOTHER SIDE NOTE:
Going along with the non-romantic relationship idea …. maybe Adam and Eve fall into this category. Afterall, they weren’t laying together. That opens the door to a variety of male/female pairings.

I'm female, 28, a musician who plays a white ukulele and a black guitar, and I'm a fraternal twin. I have a fondness for tropical islands and wondering what's across the sea. Unlike the MIB - I've left home, many times, and concur with the Beach Boys that the cutest girls in the world are indeed housed in the United States (of Elizabeth Mitchell).

5 thoughts on “Ben, Annie, The Vaccine, and throw in Adam and Eve”